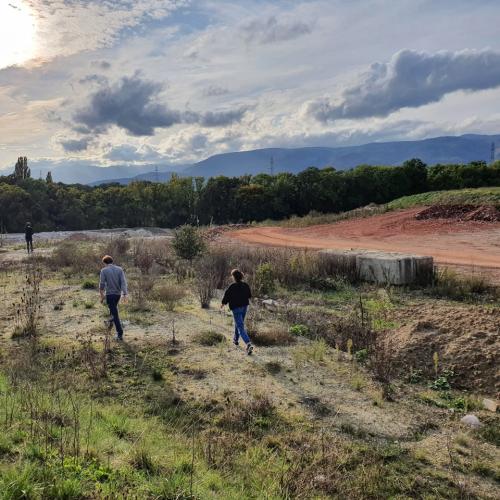 Stage director and actor Mathias Brossard is the new artist associated with far°. After studying philosophy and theatre in Paris, he obtained his Bachelor's degree in acting at La Manufacture in Lausanne in 2015. Since then, without giving up acting, he has been developing his interest in directing as an assistant - for François Gremaud, Jean-Louis Johannides, Denis Maillefer or Nicolas Stemann - and with his first creations within different companies or collectives.
With several classmates from La Manufacture, he founded the CCC collective (ensemble de Comédiennes et Comédiens à Ciel ouvert) with whom he created his first productions, notably Chekhov's Platonov, a long-running creation (2016-2022) performed in a forest near his native village in the south of Lozère in France. As part of his studies, he conducted research with the Third Floor Group on themes related to feminism and gender issues and proposed various actions and performances in institutional halls or in urban space. This work continues today with a more global reflection on multiple ways of artistically and politically occupying abandoned public places. He is also the co-founder of La Filiale Fantôme, a production structure that aims to support projects by Romain Daroles and François-Xavier Rouyer as well as his own works.

The aim of the far° associated artist program is to accompany artists by being as close as possible to their creative process. The aim is to develop new research tools and to offer greater visibility to their work. This accompaniment includes a follow-up by the far° team as well as a theoretical framework enriched by meetings, according to the wishes of the associated artist, with researchers, scientists or specialists in various disciplines. The program also aims to respond to the needs of practical research and to facilitate networking with the context of the district of Nyon, whether it is a question of finding places, meeting key people, local associations or inhabitants of the region. Through regular meetings, the associate artist also participates in the reflections led by the far° team on the artistic project it deploys throughout the year.

As part of this companionship, Mathias Brossard proposes a research project entitled Topograhique which deals with site-specific theater and its itinerancy. In response the environmental and health crisis, he questions the way of thinking, producing and disseminating live performance. Surrounded by an artistic team, he wishes to generate a true ecology of the performing arts, based on a total coherence and integrity encompassing not only the artistic approach but also questioning the logistical and administrative dimensions. Through a series of locations in geographical areas such as forests, banks, lakes and rivers, he plans, for example, to confront short perforated sequences with the topographical specificities of these different sites. What learning is produced by this confrontation ? In what way does it nourish the work with new layers of meaning?

Over a period of about two years, Mathias Brossard intends to to profit from this companionship to develop his practice of in situ over the long term. For, in his own words: "it takes time to make the place not just a mere setting but a true co-creator of the show, just like the performers and the text". (translated with DeepL)