The far° metamorphoses into a living arts factory! 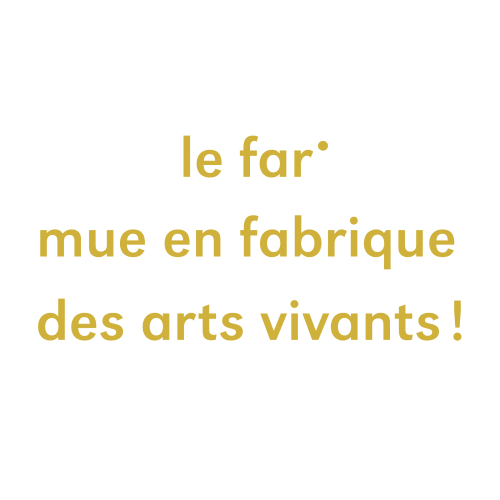 With the summer cultural season so badly affected by cancellations, you probably wonder about the far° festival in August. While we initially explored many scenarios to keep the event in its usual form, they were all interrupted by sanitary measures determined according to the evolving circumstances. As we begin a stage of lockdown easing, we are aware that we will not return to the pre-pandemic situation any time soon. Rather than waiting, fuelled by too many unknowns, we have chosen to seize this period as an opportunity rather than an obstacle to question our work and to explore, with this year's guest artists, other ways of bringing the performing arts to life during this period of uncertainty. We know that this crisis is not only a health crisis, but also a social and environmental crisis. The artistic and cultural communities will face difficulties in the long term. Current models for accessing and disseminating the living arts - such as theatre seasons, festivals, tours - are null, or in any case need to be reconsidered. We are seeking to adopt a resilient dynamic, and this is why far° is making a transition into a living arts factory.

By focusing on the essential in our collaboration with artists, we now wish to follow a different line. From now until the summer of 2021, in dialogue with the artists, far° intends to propose new practices, other temporalities and other ways of coming together. This collective adventure called Communs singuliers invites the public to take part in artistic processes. Together, it will be a question of identifying what is necessary to reaffirm the place of art in a society and a world in constant mutation. How can we continue to live new experiences through artistic practices? How can we cultivate creativity on a daily basis? One answer may be found in artistic forms that intercept reality and come to surprise us by inviting themselves at home, in public spaces, and that are activated during individual meetings or in small groups of people. Even though this living arts factory announces a new direction, it is nevertheless part of the continuity of a work that far° has been carrying out for several years, which includes creation, long-term artistic accompaniment and participatory projects.

The relationship with the territory constitutes an anchor point for (re)connecting one person to another and highlighting the environmental, cultural or architectural specificities of a place. The projects will take place in different geographical contexts, from Nyon and its district (summer 2020) to La Chaux-de-Fonds (autumn 2020) and in the Val d'Anniviers (summer 2021). This relationship with the local area, which far° has always valued, is now more necessary than ever. To inscribe art in reality, in social space and specific contexts, is to give it a new relevance.

Communs singuliers #1 : the first part of a series until the summer of 2021

From August 13 to 22, 2020, the living arts factory will open with the first instalment of the Communs singuliers series. A ten-day window to announce a project that will unfold over the months and will proliferate new ways of being, feeling, thinking and acting together; a time of "meeting" able to adapt to the health measures that will be underway during the summer. Whether collecting love songs, stories, words, or understanding how to produce and transmit knowledge, the artistic proposals presented will seek to reinvent the forms of the collective and will invite collaboration. In a context that will undoubtedly make it difficult to gather in large numbers crowds, various formats will be explored: performances in the public space without notification, sharing of stories face to face and at a distance, works sent to our home and to activate ourselves, a participatory project with a group of teenagers via telephone exchanges, radio broadcasts, choreographic journeys in the middle of nature, lunches in the grass to share knowledge about local bioactivity...

From the beginning of July, the programme of Communs singuliers #1 will be announced on this website, as well as through newsletters and social networks of far° to inform about the dates and progress of all the projects.