The Art of a Culture of Hope – A Sharing 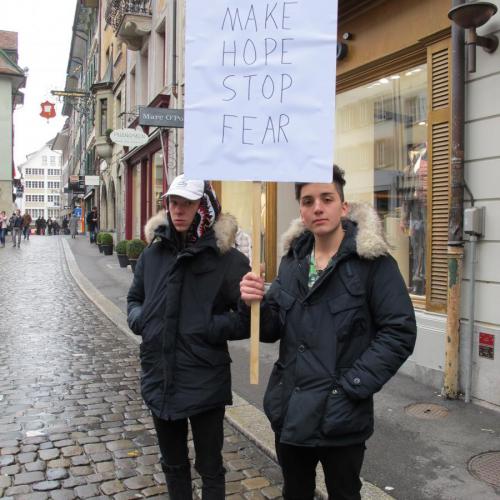 about the artists : Jessica Huber works as an artist in the field of the performing arts and is a founding member of mercimax (since 2005), a theatre group and performance installation collective, based in Zürich. Although most of her early pieces have been dance pieces, her recent work and the forms and formats she chooses, have become more diverse.Jessica works with curiosity and has a special interest in the texture of relationships and in how we function as individuals in society. She regularly gives Workshops to professionals and non-professionals (different social groups) and has created dance pieces with elderly people. She deeply enjoys diversity and is fascinated by the many possible aesthetics of exchange. In her work with mercimax she has been regularly working with non-professionals (in the sense of not having any stage experience) as the work has often had a documentary quality to it. // James Leadbitter is also know as the vacuum cleaner : an art and activism collective of one. Working across art-forms: including performance, installation and film, James Leadbetter addresses challenging and taboo issues such as consumerism and mental health. From one-man shows to large-scale participatory actions, his approach is both subtle and extreme, but always candid, provocative and playful. His work has been exhibited throughout the UK, recent major commissions include Wellcome Collection and FACT. International commissions include Festspiele/Gessnerallee (Zurich) and Vooruit/Dr Guislain Hospital Museum (Ghent). His films have been commissioned by BBC4 and Channel 4. He is an Artsadmin Artist.